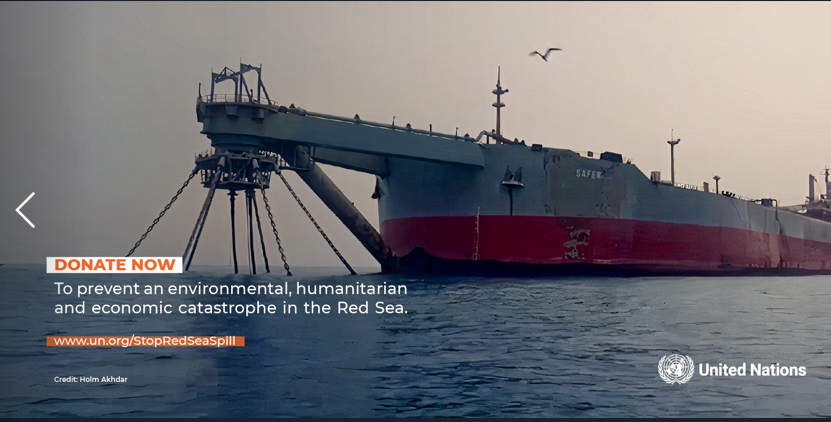 “It’s a ticking bomb”, say activists. “We’re running out of time”, warns the UN’s leading coordinator for Yemen, David Gressly. The FSO Safer oil tanker anchored off the Yemeni coast for over 30 years is deteriorating at frightful speed. The vessel is 376 meters long and is estimated to contain more than a million barrels of crude oil.

The tanker’s integrity has been decaying since its maintenance was interrupted in 2015, after the civil war broke out. The corroding Safer risks to leak its cargo into the Red Sea or to explode, causing unprecedented harm to the area’s ecosystem, population and economy.

The UN is willing to launch an emergency operation as soon as possible, as part of a two-phased plan for a total cost of $144 million, which covers both the rescue and the installation of a replacing ship for the FSO Safer. Whilst previous attempts have failed due to insufficient funds, Saudi Arabia and the United States have now pledged to provide $10 million each. This is why, the international organization is calling for a global crowdfunding to rise at least $80 million to fast-track the oil transfer into a temporary vessel before it becomes too late.

Yemen has been suffering a tragic humanitarian crisis for the past seven years, since Houthi movement – Shiite rebels with links to Iran – took over the capital Sanaa and large parts of the country. A coalition of Gulf States led by Saudi Arabia has since intervened to restore the government. The ongoing conflict has killed more than 233.000 people, whereas millions remain in immediate need of aid, risking to die from famine and a recent cholera outbreak.

According to UN sources reported by the BBC, an oil spill from the FSO supertanker could halt the import of food, fuel and medicines: vital assistance in a war zone like Yemen. Other potential impacts vary from air and marine pollution to the end of livelihood stocks for local fishermen.